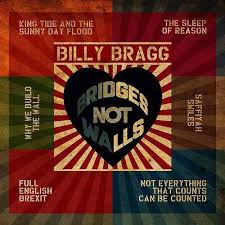 As the British Government debates the EU Withdrawal Bill I can't get Billy Bragg's new single Full English Brexit out of my head.
I first heard it when Walter posted it a couple of weeks ago and I immediately ordered up Bridges Not Walls - a CD featuring Billy's last 6 singles.
Powerful songs of protest but sadly too few are listening. Buy it and don't be one of them
A country which voted to Leave after having been told a pack of lies and fed xenophobic hatred by a bunch of public school boys reenacting a playground spat.
Truly an Accident Waiting to Happen