Gaughan Live! - At The Trades Club 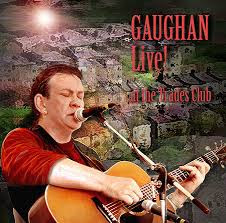 A wee bit stuck for inspiration now that the holiday and post holiday purchases have been exhausted and then I came up with this.
I finally got round to taking Gaughan Live! at the Trades Club out of the library.
I've seen it there for years , thought about it but never got round to it. Now I am about the 6th person in as many years to take it out and am kicking myself for not having done so earlier.

Recorded in the Trades Club in Hebden Bridge,North Yorkshire in December 2007 and released in April 2008.The Greentrax label website explains that:
One of the many reasons Dick has so much affection for the place is that it is a solidly working class venue and is one of the few venues where the idea of a performer having to explain why their work contains commentary on political and social issues would be absurd - it is not only taken for granted, but expected, that working class art and politics are inseparable.
He is not alone.JC visited there recently and wrote a great piece about it here

No Gods has featured here before and also at JC's and at Drew's place and I make no apologies for playing it again. It does no harm for a nation to take a good hard look at itself.

Sadly Dick is now in very poor health but still remains a true legend and a giant of Scottish folk music.