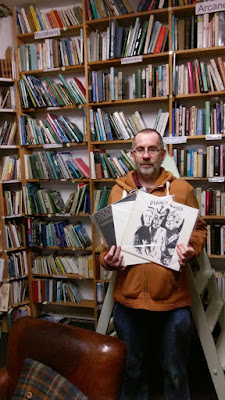 The Bookshop in Wigtown is the largest second hand bookshop in Scotland .It has approximately 100,000 books and the last time I visited it one box of records, Guess who came away with 3 records and no books?
Lest I am accused of being a Philistine I had half an hour earlier purchased Peter Guralnick's book Careless Love: The Unmaking of Elvis Presley in the Old Bank Bookshop across the road.

The more observant among you or those who go to the trouble of blowing up the picture will note that the album at the forefront of the three albums pictured  is Planet Waves the 14th studio album from 1974 by Bob Dylan.
Not his best by any means but certainly not the worst. Probably nestling in just about the middle if you were to rank them.
He is joined by The Band on an album which  he describes in his art work on the cover as consisting of  cast-iron songs and torch ballads.

The other two purchases will feature in due course.