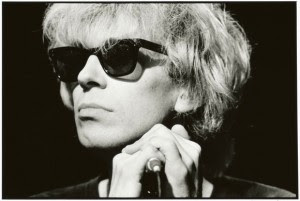 The Arch Druid has graced these pages on a few occasions and almost certainly will do so so again.
A couple today  from Floored Genius - The Best of Julian Cope and the Teardrop Explodes 1979-91 released on Island in 1992
Among his many compilations released since there have been a further 3 Floored Genius albums:
1993 Floored Genius 2 – Best of the BBC Sessions 1983–91
2000 Floored Genius 3 – Julian Cope's Oddicon of Lost Rarities & Versions 1978–98
2009 Floored Genius 4 – The Best of Foreign Radio, Rare TV Appearances, Festival Songs & Miscellaneous Lost Classics 1983–2009
He's nothing if not eclectic
There are 4 phases to the record:
Phase 1 with the Teardrop Explodes November 1978 - November 1982
Phase 2  June 1983 - March 1985.  -An Elegant Chaos from the 1984 album World Shut Your Mouth is from this phase
Phase 3 September 1985-October 1988
Phase 4 April 1989 - March 1991 from where Beautiful Love from the 1991 album Peggy Suicide is taken.
The other 18 songs on the album are just as good