A Band I Really Thought Would Make It 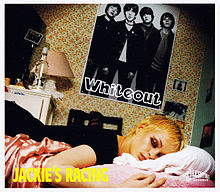 I'm sure we can all come up with examples of bands that we really thought would make it but didn't.
Then we compare them to some who did and shake our heads in disbelief and proclaim that life is just not fair.
One such band for me were Whiteout a Greenock band who I got into around 1995.
Signed to the Silvertone label I got their album Bite It, the CD single of Starr Club and the 12 inch single of the single Jackie's Racing.
They flirted with the upper echelons of the charts with Bite Out making it to number  71in the album charts Starr Club to number 80, Jackie's Racing to 72 and two other singles No Time and Detroit making it to number 83 and 73 respectively.
Close but no cigar. Which is a great shame as they made some wonderful jingly jangly melodic guitar music in the style of Teenage Fanclub.
Here are the tracks on the Jackie's Racing single

Whiteout - So Confused
Posted by Charity Chic at 08:00