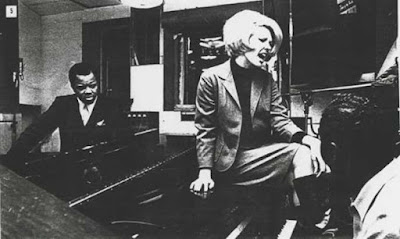 Last Saturday I popped into by local charity shop and came away with two Tamla Motown compilations.
40 tracks for a pound - outstanding value.
Today we will concentrate on Tamla Motown Connoisseurs (2001) - 20 in-demand tracks most of which have never featured on CD before.
I've gone for two female artists whom I have never featured before.
First up is a 1966 recut of the Frank Wilson classic Do I Love You (Indeed I Do) by Motown's queen of blue-eyed soul Chris Clark recorded four months after the original
She cut two albums between 1967 and 1969  (Soul Sounds and CC Rides Again)and was the secret mistress of  Berry Gordy.
She wrote the screenplay for the Diana Ross picture Lady Sings the Blues and received an Academy Award nomination and became an executive for Motown Film and TV.

Brenda Holloway first recorded for Motown in 1964 at the age of 17. She left Motown in 1968 due to her
disillusionment with Motown and with her management, and her fear of being drawn into a lifestyle which conflicted with her religious convictions
This song is from 1965 written by Robert Staunton and produced by Berry Gourdy

Chris Clark - Do I Love You (Indeed I Do)

Brenda Holloway - Tell Me Your Story
Posted by Charity Chic at 08:00