She's The One That Keeps The Dream Alive 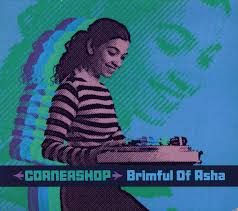 Us bloggers are occasionally guilty of ignoring an artist's greatest hits and focusing on some of their lesser known numbers.
I'm as guilty as the next man or woman given that I have featured Cornershop on more than one occasion but never with their biggest hit and their only number 1 Brimful of Asha.
A song based on the history of Indian film culture namechecking Asha Boshle a playback singer in countless Hindi films.
It originally only reached number 60 in the UK charts in 1997 before reaching number one in February 1998 with a remixed version by Norman Cook.
I've had the album version from When I Was Born for the 7th Time since it's 1997 release picking up the above CD single version some years later.