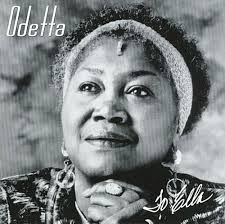 The most recent edition of Mojo has really come up trumps with their monthly cover Cd.
Entitled True Faith it consists of 15  tracks of soul-stirring gospel, country and blues.(here)

A fair proportion of gospel giants feature and I reserve the right to revisit this at a later date and feature some of them probably on the Sunday slot.
Initially I have been grabbed by the two songs below
The first track is a rehearsal version of Slow Train by Bob Dylan which features horns. A terrific version available on Trouble No More: The Bootleg Series Vol 13 (1979 -1981)
I only have Volume 4 Bob Dylan Live 1966 : The "Royal Albert Hall" Concert.
I should probably  get more.

I've not heard much stuff by Odetta but what I have heard has been top quality. This traditional gospel song from 1960 is no exception

Odetta - Go Tell It On The Mountain
Posted by Charity Chic at 08:00