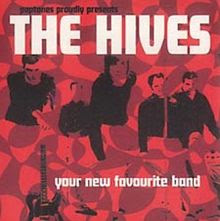 Happy May Day to you.
I've pretty much exhausted my Imelda May section in previous years so rather today a random selection from a band I don't think has featured before.
The Hives are from Sweden and their album Your New Favourite Band was released on Alan McGhee's Poptone label in 2001 to great hype
It features tracks from their first two LPs and the A.K.A I-D-I-O-T EP

All the songs were written by the not particularly Swedish sounding Randy Fitzsimmons..He may or may not be band member Nicholaus Arson (real name Niklas Almqvist)
As is the way of such hype they shone very brightly very briefly before very rapidly fading away.

The Hives - I Hate To Say I Told You So

The Hives - Main Offender
Posted by Charity Chic at 08:00