Springsteen Covered - Dancing in the Dark 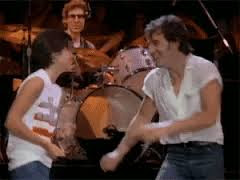 Last week's contest of Bruce versus Patty Griffin with Stolen Car went one way and then the other.
In the end it was the first draw of the series so the score remains The Boss 7 The Rest 3 and which means you get another week's worth of Bruce.

This week we re-visit Born in the U.S.A with Dancing in the Dark one of the seventy three top ten singles from that album. It was his biggest selling single ever and the first one from the album..It originally reached number 28 in the UK singles chart upon release in May 1984 before re-entering the chart in January 1985 on the back of the success of the album this time reaching number 4 and winning him his first Grammy award.
Bruce is up against Ted Leo this week.I'm not sure if this is a solo performance or whether he is appearing with his band the Pharmacists.
Ted wins it for me given that he is the only one of the two ever to have written a song about drinking Buckfast in Govanhill..Also he has never been fortune enough to pluck out Courtney Cox at random from the audience of a Pharmacist gig for an impromptu boogie on stage

Others, of course may choose to disagree

Bruce Springsteen - Dancing in the Dark

Ted Leo - Dancing in the Dark
Posted by Charity Chic at 08:00