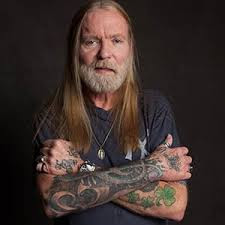 A friend texted to advise as to the death of Gregg Allman. Another friend texted that he thought that he had died years ago.
Even having established that he was not confusing him with his brother Duane who died in 1971 aged 24 it was  a fairly easy mistake to make given his years of alcohol and drug addiction. Not many would have put money on him making it to 69.
A couple of years ago after having read his autobiography My Cross to Bear I sought out some Allman Brothers Band stuff by way of Midnight Rider: The Essential Collection.
Some excellent Southern Country rock on there.
He subsequently had a reasonably successful solo career culminating in 2011's Low Country Blues.