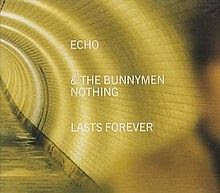 I don't think that Echo and the Bunnymen have ever featured on these pages.
Apologies for that. But hey, Nothing Lasts Forever.
From 1997 and picked up recently in the BRICC thriftshop in Ballantrae it was their first single from Evergreen the album from when the band reformed after a four year hiatus.
It reached the dizzy heights of number 8 in the UK charts.
As was the way back then the single and the 2 x CD singles all have different track listings For the collector the French and German CD versions have different track listings still.
Mine has Watchtower and the rather splendid Polly on it.

Echo & the Bunnymen - Nothing Lasts Forever