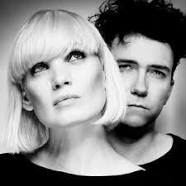 From 2003 Chain Gang of Love on Columbia was the first full length album by Danish due The Raveonettes.
I think it is alright but not a patch on it's predecessor the 20 minute 8 track EP Whip it On.
Like Whip it On the majority of the songs come in at under 3 minutes and it is recorded in B minor giving it a somewhat scuzzy sound.
The only time I ever saw them live blowing away the headliners Razorllight at King Tuts lives long in the memory.

The Raveonettes - Chain Gang of Love
Posted by Charity Chic at 08:00