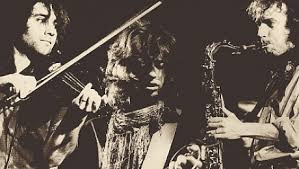 Back a little bit further in time today - between 1981 and 1990 to be precise with the Best of The Waterboys picked up recently in a three for a pound deal.
Possibly because of their Celtic folky sound many folk initially have them down as an Irish band.They are wrong there as they were founded in Edinburgh in the early 80's by Mike Scott who hails from the Scottish West Coast seaside town of Largs
A banging track from each of their two most famous albums Don't Bang the Drum from 1985's This is the Sea and A Bang on the Ear from 1988's Fisherman's Blues

Mike Scott claims that The Waterboys have had more members than any other band in rock history. That honour however must surely go to The Fall

The Waterboys - Don't Bang The Drum

The Waterboys - And a Bang on the Ear
Posted by Charity Chic at 08:00