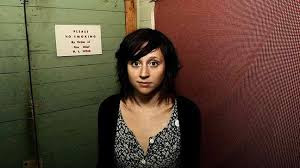 Katie Crutchfield who goes by the nom de plume Waxahatchee has a new album called Out in the Storm coming out soon.
I've seen it advertised for 23 quid for a vinyl copy or 34 quid for the deluxe double album version.
Given that this represents about half my annual record buying budget you will just have to settle for a couple of tracks from her excellent third album from 2015  Ivy Tripp
The band are named after Waxahatchee Creek in Alabama with the word deriving from the Muskogee language one of the languages spoken in the Creek Nation (now Georgia and Alabama) Here is a more detailed explanation

For some reason my burning software has not recogised the media content so this may come up on your screens as unknown. Apologies.

Waxahatchee- Under a Rock

Waxahatchee - Summer of Love
Posted by Charity Chic at 08:00