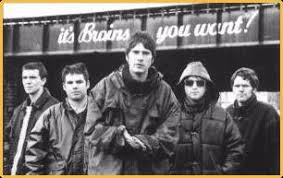 Super Furry Animals records - like buses. None for ages then two come along at once.
I hadn't intended to re-feature them quite so quickly.
However, when I stumbled across their 1996 debut album Fuzzy Logic for 50p in my local charity shop it seemed foolish not to.
I've deliberately avoided selecting any of the singles which are also included on last week's featured album Songbook.
Rest assured that there is still plenty of quality to choose from as these two numbers hopefully demonstrate.
I think that a  post featuring Hangin' with Howard Marks has appeared on the blogosphere fairly recently - at Jez' place perhaps?