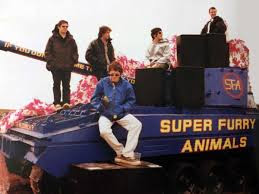 It's SFA Sunday today.
Not Sweet Fanny Adams the second album from The Sweet released in 1974 nor indeed the blazer wearing incompetents that are the Scottish Football Association.
No it is Welsh psychadelic rock band Super Furry Animals.
A band I didn't think I was too familiar with until I picked up Songbook which features their first 21 singles  but it turns out that I recognized a few of the tunes.
I came across it as I neared the end of the last shelf of the fourth and final charity shop in Stranraer (now five as the Cat Protection League were scheduled to open the next day).
So I very nearly ended up with Sweet FA.
A band I know that some of my blogging chums are very keen on and one I am enjoying catching up on.
I could have featured any of the 21 singles (except Hermann Loves Pauline which has featured before) as they are all of consistently high standard.
I have opted for these two, one in English and one in Welsh.