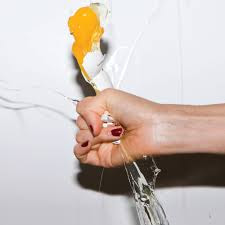 The next two days will feature posts from a new occassional series - Upgraded.
Like most of you I would imagine I have a number of burns rather than original CDs - either from the library or from friends.
Burns officially don't count so it is always good to upgrade to the actual disc particularly when your local charity shop is selling them for 50p a pop.It's also ggod to get your hands on the sleevenotes and the cover as well.
The first to feature is one which I know will delight The Robster and indeed I suspect many more of you.
The post title somewhat gives it away but not necessarily the album cover.Yes it is It's Blitz! the third album by New York's Yeah Yeah Yeahs.
An album I'm willing to bet which is on the shelves of both Stina Tweeddale of Honeyblood and Jehnny Beth of Savages.

Seconds out tomorro
Posted by Charity Chic at 08:00