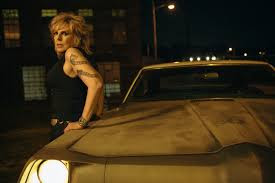 In the end a fairly convincing victory by Bruce over Johnny Cash with their respective versions of Johnny 99. I suspect that it may well have been different had The Man in Black been on the top of his game.
Generally agreed that both have recorded much better.
Bruce is now building a somewhat commanding lead with the score now The Boss 5 The Rest 2.
Can he be stopped and will this week's offering narrow the gap?

It is our first visit to Darkness on the Edge of Town with Springsteen's blue collar anthem Factory.
The cover version was not originally on my radar when I mooted this series put it popped up the other day when I was listening to Lucinda Williams latest album The Ghosts of Highway 20.
I'm a massive Lucinda fan and no-one does a dirge better than her so it is Lucinda for me this week.

Others. of course, may choose to differ