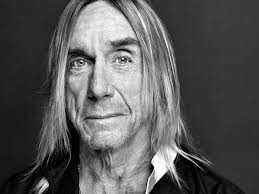 I was listening to 6 Music on Friday night (21st April ) when Iggy Pop came on to do his show with the announcement that it was his 70th birthday. He announced that he shared the date with Robert Smith of The Cure who has just turned 58 and some wifey called  Betty Windsor who is now 91. I don't have any of her records.
At one stage you wouldn't have put money on Iggy reaching 50 never mind 70.However, he still appears fighting fit and has maintained his inner child and indeed a great taste in music.

Long may he reign over us.