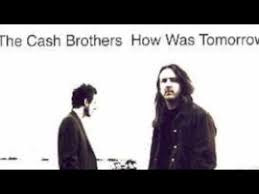 When you are struggling for something to write, which is often the case, it is often good to visit other blogs to plagiarise for inspiration.
Hence my last two posts with have been inspired by visits to Brian and Jez' places.
Brian is again today's source of inspiration albeit in a slightly more obtuse way. The way my mind works his recent featuring of The Elvis Brothers got me thinking it was high time that The Cash Brothers graced these pages.
From Toronto brothers Andrew and Peter Cash were part of the alt country scene in the first few years of the Millennium
These two stonkers are taken from 2001's How Was Tomorrow on Zoe Records  which is pretty much a re-release of their 1999 album Raceway.
No relations to the great man as far as I am aware

The Cash Brothers - Nebraska
Posted by Charity Chic at 08:00