Missed the Cut: Then Jerico; 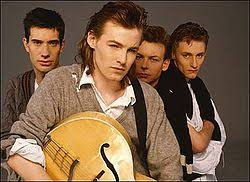 I am still working my way through my recent windfall.
Some have already been dispatched back to the charity shop and a few have found their way to the shelves.
Then there is what I'm referring to as the Kenny Dalglish pile - The Maybees Ayes, Maybees Nos which will require a listen or two before a final decision.
One which comes into this category was The Best of Then Jerico; (not sure whether the semicolon is obligatory or not).
A late 80's band I had vaguely heard of but couldn't tell you any of their songs. Mrs CC's sister was obviously a fan as there is also a vinyl LP of theirs from the same source.
I recognized the first song Big Area which is just about ok. Thereafter it goes down hill fairly rapidly and it was a struggle to pick a second from those I listened to. I never made it to the end.
As bland as Big Blandy McBland the king of the Bland people.
Needless to say they are now on the revival circuit which smacks of desperation.
This one is going back

Then Jerico; - Muscle Deep
Posted by Charity Chic at 08:00