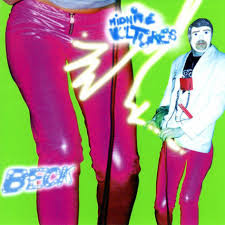 The second installment in this occasional series is Midnite Vulture the fourth official studio album and seventh overall released by Beck in 1999 on DGC Records.
One I had from the record library and hadn't played in ages. Not sure why really as it is terrific. It has probably been played more in the last week than in the last decade.
As I mentioned yesterday a bonus of acquiring the actual article is that you get the cover as well as the music and in this case it is every bit as psychedelic.
I only have this and Odelay so plenty of others to explore

I suspect that both yesterday's and today's were handed in by the same person. The fool.
Be aware that this series will pop up when you least expect it, Stay tuned