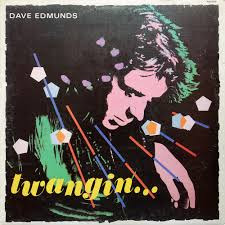 The last time I featured Dave Edmunds was in April 2014 just after he had celebrated his 70th birthday.
I played a couple of songs from his 1979 album Repeat When Necessary.
This time round it is the turn of the 1981 follow up Twangin on the Swan Song label and an album I picked up for 75p somewhere along the way
Pretty much an album of covers but done in his own inimitable style where he manages to sound like a one man Everley Brothers if that  makes any sense.
Here is his version of Melvin Endsley's Singing The Blues which was made famous by Tommy Steele whose version has featured here before.
Dave follows that with his take on John Fogerty's Almost Saturday Night.