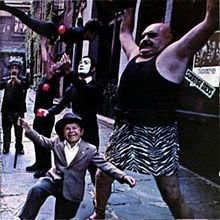 I don't know that I've ever posted anything by The Doors before.
I suspect that this may be primarily because apart from the odd song on a compilation here and there the only album I have of theirs is Strange Days their second studio album from  September 1967 the summer of love and all things psychadelia.
Described by music critic Robert Christgau as muscular but misshapen a description guaranteed to pique your interest

Even then it is not the original but a freebie from the Sunday Times. Worry not I did not take the Murdoch shilling. It came courtesy of my mother-in -law.

The Doors - People Are Strange

The Doors - When The Music's Over