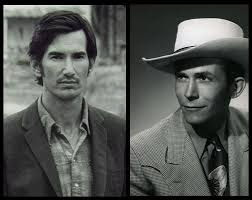 As is  traditional on New Years Day at Charity Chic Music we pay tribute to two great artists who both died on January 1st.
Sure 2016 saw a lot of heroes fall but many had fallen before them.
The greatest country singer of them all the Hillbilly Shakespeare Hank Williams fell on the 1st of January 1953 aged just 29.
Another country superstar Townes Van Zandt fell on the 1st of January 1997 aged 52

Both are hopefully still Honky Tonkin' in a better place.