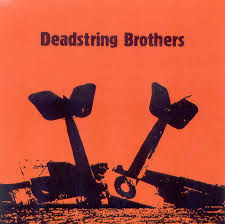 During my extensive research for my Burnt Offerings series (i.e. giving the CDs a listen) Detroit alt country band the Deadstring Brothers popped up.
Surely they have featured before I thought given that their self titled debut album from 2003 is on the shelves.
Apparently not it seems so time to rectify that anomaly.
My signed copy is on Times Beach Records as opposed to Bloodshot (their spiritual home) and was acquired when the played the original Stereo bar in Glasgow's Kelvinhaugh Street at a gig put on if I recall by Tom Marsden a sound bloke and a mighty fine peddle steel player.

Deadstring Brothers -I'm Not a Stealer