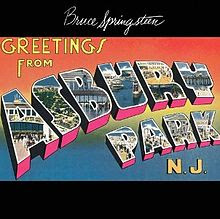 I am currently reading and enjoying Born to Run the Bruce Springsteen autobiography which was a Christmas present to myself.
A well written and interesting read following his life and career in chronological order.
It has had me reaching for some of his earlier stuff which has not had an airing for a while.
His 1973 debut album Greetings From Asbury Park, N.J. for instance.
The original version was returned  by Clive Davies at Columbia Records as it didn't contain a hit single.
Undeterred Brucie quickly rattled off Blinded by the Light and Spirit in the Night in jig time as you do. However, neither charted.

Bruce Springsteen - Blinded By The Light

Bruce Springsteen - Spirit In The Night