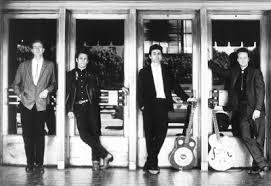 One day in between Christmas and New Year (don't ask me which day of the week as I have no idea) I popped into my local Oxfam music shop with a view to picking up some goodies.
It was lean pickings I'm afraid and I only came away with the one album Lonesome Pine by the Lonesome Strangers from 1988 and on Special Delivery Records
Not a band I knew at all but I was attracted by a sticker that stated Produced by Pete Anderson/ Independant Country.
Anyone who is produced by Pete Anderson and who can't spell is surely worth a punt.
Further investigation revealed that the lead singer was one Randy Weeks who I had seen live on a couple of occasions many years ago.
The internet later told me that Randy and fellow band member Jeff Rymes provided backing vocals on one of the greatest ever albums of all time  Buenos Noches from a Lonely Room by Dwight Yoakam another Pete Anderson production. That would have totally sold the deal.

The Lonesome Strangers - The One Who Wore My Ring

The Lonesome Strangers - 8-Ball
Posted by Charity Chic at 08:00