Songs From The Battlefield 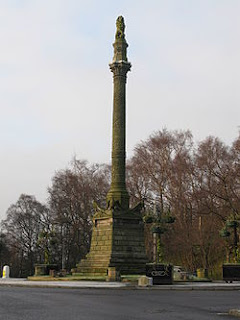 Great excitement at CCM HQ as a new Charity Shop opens in Glasgow's  Battlefield Road.
Battlefield is named after the Battle of Langside which took place on 13th May 1568 and involved Mary Queen of Scots and a few others
The above picture is of the monument commemorating this event.
I rented a flat on Battlefield Road for a couple of years and there was allegedly a brothel next door - but that's a story for another day.

It is just around the corner from my barbers (the charity shop!) so I popped in to hand in a couple of things and came away with If the Ocean Gets Rough the second album by Willy Mason from 2007.
I picked up his debut Where the Humans Eat a couple of years ago in nearby Cathcart and wonder if they were handed in by the same person.
Excellent stuff which puts me in mind of Ron Sexsmith and Richard Hawley in places

Willie Mason - The End of The Race
Posted by Charity Chic at 08:00