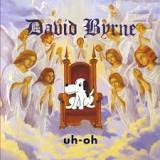 The vast majority of the albums released by the Talking Heads can be found on the shelves in either vinyl or CD format or in some cases both.
However I only own one of David Byrne's solo albums or collaborations and that is Uh-Oh his third solo record from 1992.

I don't really like the term world music but David Byrne was one of the first artists to dabble in the music from countries which hitherto  did not have widespread exposure to the record buying public of the US and the major Western European countries.
He is not afraid to experiment with sampling either or to explore a more ambient sound.
In short a bit of a musical pioneer.
Uh- Oh has a bit of a Latin feel to it with a brass section predominantly featuring.

We Scots like to claim him as one of our own being born in Dumbarton prior to moving to Canada as a 2 year old and subsequently to Maryland in the States.

David Byrne - Girls on my Mind

David Byrne - Hanging Upside Down
Posted by Charity Chic at 08:00