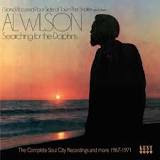 You will all be familiar with the Northern Soul classic The Snake by Al Wilson. It has graced these pages before.
Most folk, myself included, only really know him from this song so I thought I would explore a bit further.
His given name was Allen LaMar Wilson which to me is far more impressive that merely Al. It would have also fitted neatly into my Friday Three Name series
He died in 2008 at the age of 68 having released 6 albums between 1968 and 1979 with two compilations in the 2000's.
The Snake was first released in 1968 to limited acclaim and featured on his debut album Searching for the Dolphins. it was subsequently re-released in 1975 reaching number 41 in the UK singles chart.
Surprisingly to me many of his songs appear to be ballads.
Here are a couple of the more up tempo numbers from that first album.

Al Wilson - Do What You Gotta Do

Al Wilson - Who Could Be Lovin' You (Other than Me)

Sod it , I know I've posted it before but it's so good that you are getting it again.