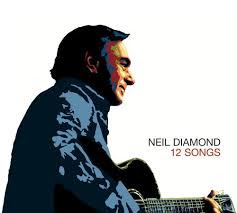 It strikes me that when artists who have had an illustrious career but whose star is gradually fading that they have two final items to be ticked off their bucket list.
The first is to appear on the Sunday afternoon slot at Glastonbury and the second is to have an album produced by Rick Rubin.

So step forward Neil Diamond with 12 Songs his twenty sixth studio album from 2005 and no doubt inspired by the career reviving success that Johnny Cash enjoyed following The American Recordings series.

Although the album is called 12 Songs and the 12 songs are indeed rather good you should seek out the version with the bonus two songs as they are absolutely fantastic particularly the version of Delirious Love featuring Brian Wilson.

Neil Diamond - Men are So Easy