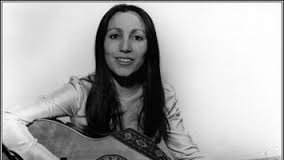 A fair amount of indifference last week which is a pity as there were two belting versions of Every Grain of Sand.
The unanimous verdict was that Emmylou Harris' version was the better so after week 5 it is Bob 2 Cover Artists 3
Another tough one this week.
I bough Flowers a 1967 album by US born and British based folkie Julie Felix in Forres whilst on my holidays. It contains two excellent Dylan covers Gates of Eden and Chimes of Freedom
I've chosen Gates of Eden as I have previously featured Bob singing Chimes.
Julie is up against Bob's version from 1965's Bringing It All Back Home when he was in the middle of his most famous purple patch and for me this week Mr Dylan just shades it but it was a close call.

As per usual, others may choose to disagree

Julie Felix - Gates of Eden
Posted by Charity Chic at 08:00