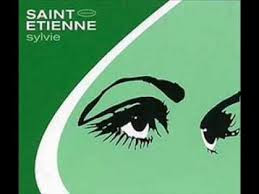 A recent foray to the Oxfam music shop on Glasgow's Victoria Road saw me come away with 6 CD singles from the three for a pound box.
So three lead tracks today and three tomorrow reserving the right to re-visit them in due course to share other tracks if need be.
Sadly I'm not as flush as the chap who left 46 quid cheaper but with two Fall vinyl albums under his arm (I Am Kurious Oranj and another whose name I did not get.)

So the first three of my meager pickings.
Sylvie by a band held in high regard by many a blogger Saint Etienne. From 2006 the first single from their fourth album  Good Humour and one which reached number 12 in the UK singles charts
Another hugely popular artist is the late great Kirsty MacColl. with 1995's Caroline from the Galore album which criminally only peaked at number 58
We are off to Wales for the final song in this first trio and the  cuddly Super Furry Animals with Hermann ♥'s Pauline the first single off their second album Radiator which reached number 26 in the UK singles chart in 1997.
Second installment tomorrow.