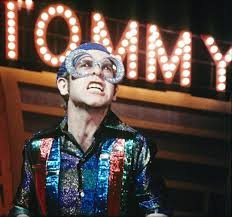 This series has become a but of a struggle a lot earlier than I thought it would partly because I have exhausted my initial list and also because there are well over a dozen songs which could have featured in this series but have already graced these pages.
Also I haven't had the time or the  inclination to sit down properly  and come up with some more thoughts.
So I am at a stage when I come across a namecheck  whilst listening to a song and I have a song by the artist it is going on.
S-O-R-R-Y is a song from The Proclaimers 2007 album Life With You which  I like to think is about Tony Blair
This wouldn't necessarily have been my first choice for an Elton John song but Saturday Night's All Right for Fighting and Benny and the Jets were not at my disposal