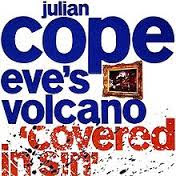 The third and final recently acquired 12 incher is from the old Arch Druid himself Julian H Cope with Eve's Volcano (Covered in Sin) the third and final single from his 1987 album Saint Julian which peaked at number 41 in the UK singles chart. Saint Julian on the other hand was his most successful solo album reaching the dizzying heights of number 11 and being the only solo album to earn him a silver disc (The Teardrop Explodes got one for Wilder)
The other two singles from the album were the more successful World Shut Your Mouth and Trampolene.
The other track that I am subjecting you too is a typical Copey  number Almost Beautiful Child (I & II) which contains the proverbial bells and whistles.