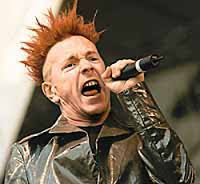 Johnny Rotten, or to give him his Sunday name John Lydon, is namechecked on not one but two songs on Neil Young's Rust Never Sleeps
I couldn't decide which one to feature so being a generous person I thought I would give you both.
Also I was in a quandary as to whether to play the Sex Pistols or Public Image Ltd.
Good though the Pistols were this is possibly his best six minutes.
And remember Anger is an Energy
More namechecking next week.

Neil Young & Crazy Horse - Hey Hey, My My (Into the Black)