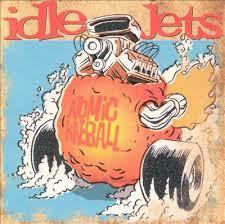 A bit of end of 20th Century Power Pop for you today courtesy of Idle Jets and their  1999 album Atomic Fireball.
Up until now I though they were called Idlejets (all one word) but it seems that I was wrong there.
They are the baby of Tennessee based session guitarist Pat Buchanan who has worked with a number of bands including Cameo, Cyndi Lauper and Hall & Oates.
I saw him playing in some band at King Tuts - from his biography info on All Music it might well have been Jeff Finlin. I seem to remember him doing a veersion of Word Up much to the crowd's amusement
I can't for the life of me remember whether his band were the support act
Whatever he/they must have made some sort of impression on me as I came away with a signed copy of the albuim