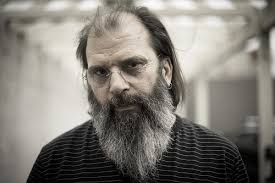 The vast majority of namecheck songs are pretty complimentary to the person being name checked.

I'm not sure whether that could be said about Steve Earle by Lydia Loveless
Apparently it is fictional
Here is what Music Times has to say
After a few shows, a few propositions for a duet performance, and one leaked cell phone number, Loveless penned "Steve Earle" as a humorous tale about her biggest fan. Reactions from the Steve Earle camp have been mixed, with some close to the real Earle telling Loveless it "hit the nail right on the head," and Earle's (now ex-) wife, country singer Allison Moorer, expressing her irritation via Twitter. Loveless hopes to explain the whole story to Earle someday.
Allegedly it is about a stalker who looks like Steve Earle.With that beard Steve could probably pass as a stalker
It is from the 2012 Bloodshot Album Indestructible Machine which also includes Jesus Was a Wino so perhaps she was looking to draw some attention to herself

Unperturbed here is a namecheck song by Steve Earle but with a difference as no-one is named. Ft. Worth Blues from El Corazon is his tribute to the previously namechecked Townes Van Zandt.

Something less complicated next week.

Steve Earle - Ft. Worth Blues
Posted by Charity Chic at 08:00