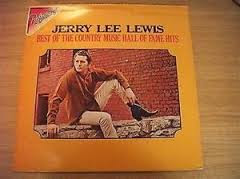 In the late 60's Jerry Lee Lewis resurrected his career by switching from Rock'n' Roll to Country.
In 1969 he recorded two albums of classic country songs in four sessions over two days as a way to fulfil his contractual obligation to his record label Smash.
Slightly better than Metal Machine Music I'm sure you'll agree
The pictured album above which is the one on the CC shelves is a compilation of the best of Volumes One and Two and is from 1981.
His move to Country was a huge success and it is interesting and indeed entertaining  to hear his take on the standards with his trademark ivory tinkling thrown in for good measure

More VCV next Friday but not from JLL.

Jerry Lee Lewis - I'm So Lonesome I Could Cry

Jerry Lee Lewis - It Makes No Difference Now
Posted by Charity Chic at 08:00