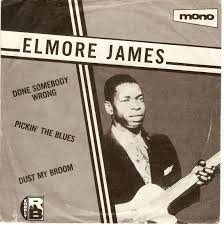 I suspect many of us have still got the Blues following on from last Thursday's debacle.

So here is the great Elmore James - the king of the electric slide guitar with Dust My Broom which again I strongly suspect like many Blues songs may well be a euphemism.
It seem that he did not even realise that he was being recorded as he had merely gone to the Trumpet Studios in Jackson  on 5th August 1951 to help out on a Sonny Boy Williamson session.
He only had a brief recording career dying from a heart attack in 1963 but he was a significant influence on the likes of Jeff Beck, Peter Green John Mayall and Brian Jones.
Also from a session in New York in May 1960 here is the suddenly prophetic The Sky is Crying.

Elmore James - The Sky is Crying
Posted by Charity Chic at 08:00