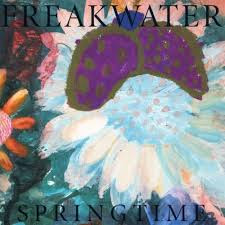 Is it now officially summer?
It seems that way in Glasgow where it has been scorching .
When better then to feature an album called Springtime
On Saturday I posted a song from this album from Louisville band Freakwater to commemorate the passing of that town's most famous citizen.
Playing the album again had me thinking that A) it would not have been out of place on my recent Bluegrass Monday series and B) it was too good not to share a couple more tracks with you.
Featuring the wonderful harmonies of Janet Bean and Catherine Irwin it is from 1998 and was released on the Thrill Jockey label
The have just released Scheherazade their first album in nine years on the Bloodshot label which seems a natural home for them.
Scheherazade  was a legendary queen and the story teller of One Thousand and One Nights (I didn't know that, I had to look it up).

Freakwater - Picture in my Mind