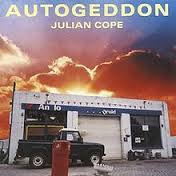 From 1994 Auotgeddon is Julian Cope's diatribe against the car culture targeting them as a metaphor for environmental destruction.
Typical fayre then for the Arch Druid to get his teeth into.
The cover photo is of a garage in a village near Betws-y-Coed in Wales which Julian passed following a cancelled tour to Ireland due to illness and he saw this old garage calling to me. An Autogeddon sign if ever there was one
Mark Chapman as most of you will be aware is the man who murdered John Lennon