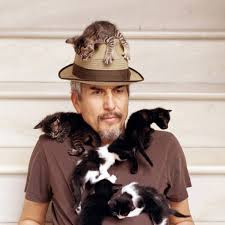 The weather here has returned to a  degree of normality
Haven't had to put the heating back on yet but the short sleeved shirts have been replaced by long sleeved ones and the sandals have been put to one side.
It is not quite Howlin' a Gale yet but that song by Howe Gelb from his 2006 album 'Sno Angel Like You has been floating around my head for a few days
Howe has jettisoned his erstwhile colleagues and near shelf neighbours Giant Sand and is joined by a gospel choir.
I'd forgotten how strange an album it is.

I once offered to buy Howe a pint. He politely declined. Such is the rock 'n' roll lifestlye