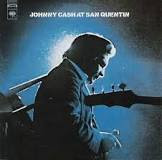 This album was always going to feature - just not perhaps so early.
However, I haven't had time to listen to and select the tracks from the one I had in mind so Johnny jumps the queue
Recorded live in San Quentin State Prison on 24th February 1969 it was released on 4th June with the concert being recorded for Granada Television
It is a follow up to his At Folsom Prison album from the previous year
It includes the first ever performance of San Quentin which as you can imagine sent his captive audience completely wild
Yet another example of why Johnny was such a great man taking the time to visit and perform in prisons and treating the in-mates as fellow human beings with no preceptions or prejudices.
People today could learn a lot from him
Bought in Carlisle