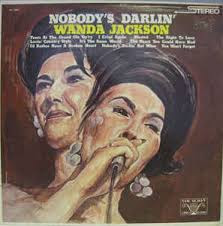 Another artist who made the crossover from Rock'n'Roll to Country was the Queen of Rockabilly herself Miss Wanda Jackson.
I haven't been able to glean much information on Nobody's Darlin' other that it is from 1969 and is on Vocalion (Simulated Stereo Records) an off shoot of Decca.
It doesn't appear on the discography on Iffypedia so I not sure whether it is kosher or perhaps a compilation.
She released a lot off country stuff around  then
It seems she recorded some in German, Dutch and Japanese which would make interesting listening.
She that graduated to gospel prior to returning to her Rockabilly roots.

More Vintage Country Vinyl next Saturday - regrettably not in German, Dutch or Japanese

Wanda Jackson - Nobody's Darlin' But Mine