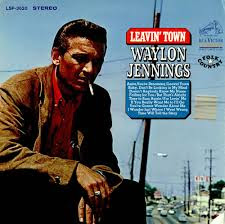 One of the recent vinyl purchases which inspired  this series is Leavin' Town by Waylon Jennings.

Initially there was a fair degree of trepidation given that some of his output from his Outlaw period was pretty ropey, From the cover I guessed that this LP pre-dated that period and do you know what I was right
From 1966 it is his third album on the RCA Victor label and it is an absolute cracker.12 belting country crooners and it is over and done with in less than 30 minutes

Bobby Bare is quoted on the album cover describing Waylon as exciting, fresh and talented and on this offering it is difficult to argue with that
Waylon died on 2002. He had six kids, some with strange names including his boy Shooter who is also a country singer

Waylon Jennings - Doesn't Anybody Know My Name
Posted by Charity Chic at 08:00