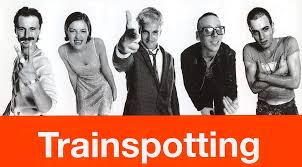 Can it really be 20 years since Irvine Welsh's  great bookTrainspotting was released as a film?
I was reading an article in the Sunday Herald magazine (well it was either that or one on Michael Gove) which argued that it changed cinema for good
As the article says Trainspotting can be grim but it's ridiculously good fun
I wouldn't apply the former to the fantastic soundtrack but the latter certainly applies.
No Lust for Life , Born Slippy, Perfect Day or Temptation for you today but rather a couple that didn't get the same exposure.

Trainspotting 2 is in the pipeline and due for release in January 2017. I'm not so sure it is a good idea but am looking forward to the soundtrack