It's Hard to be Humble (When You're From Alabama) 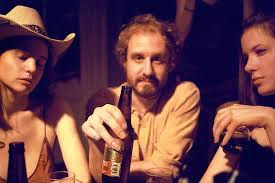 I first came across the music of Matthew Houck who records under the  name of Phosphorescent on an Uncut or Mojo compilation when one of his songs came mighty close to being selected for my Saturday Lucky Dip slot.
Therefore when I saw his 2010 album Here's to Taking it Easy going for  99p in a St Andrews charity shop it was a bit of a no brainer. It further pleased me immensely when I saw it going for a tenner in Fopp a couple of weeks later.
I suppose I should really give the album it's Sunday title which is Here's to Taking Easy (Tho the Jaws of This World Wish Only to Grab Hold of Your Sweet Ass).
He is fond of his brackets is our Matthew.
A native of Alabama he is cuurently holed up in Brooklyn.
The song that gives this post it's title puts me in mind of our very own Withered Hand.
I'm putting this down as a find although I suspect many of you good people are already familiar with him and will think that I  as is often the case have come rather late to the party

Phosphorescent - It's Hard to be Humble (When You're from Alabama)

Phosphorescent - I Don't Care if There's Cursing
Posted by Charity Chic at 08:00